The Importance of Black History

Black History Month was created by Carter G. Woodson in 1926. He believed that if a race had no recorded history, it would lose its traditions and risk having its accomplishments and culture erased. The month of February was chosen to honor the birth month of both Frederick Douglas and Abraham Lincoln. Many of this nation’s accomplishments were made possible due to the contributions of Black people. Black History Month was recognized federally in 1976.

Growing up on the West Coast and attending a traditional public school, I remember very little mentioned in my U.S. history lessons about people who looked like me. I do recall hearing about Crispus Attucks being the first man killed in the Revolutionary War. The 1960s Civil Rights movement, which occupied a small section in my textbook, mentioned Malcolm X and Martin Luther King, Jr. as two key figures in the movement. Very little was spoken or written about slavery and its impact on this country.

As an undergraduate at Kentucky State University, a historically black college (HBCU), I came to realize from my education and experience how little I knew about my own history. I began to feel a subconscious pressure around the fact that very little was being shared in public school education about the contributions of people that looked like me. I did not have heroes with whom I could identify or to whose achievements I could aspire.

What further personified this revelation for me was the release of the 1997 movie “Amistad,” which was based on a true and significant moment during America’s slave trade. The thought came to me how I was not familiar with this historical event, so I began researching and discovering other incidents in black history unfamiliar to me but instrumental in shaping our history.

For these revelations, I am so thankful for my HBCU experience, but so much more needs to be done in recognizing and acknowledging the history of blacks for everyone living in this country. First, and foremost for people of color, I pose the question, “If we have no idea of what influence our people have on this country, what does this do to us subconsciously?”

Secondly, we all need heroes, not just the descendants of slaves, but everyone. We, as a people, should know how our contributions have shaped this country. As a father of three daughters, I want to be confident that equity in education and school curriculums reflects all students.

I would like to see this country evolve to celebrate and recognize all the contributions that black Americans have made in the U.S. – not just during Black History Month, but throughout the entire year.

Let this year be the year you are intentional about increasing your awareness of Black History, and encourage others to do the same. Share this blog with others, listen to a podcast, join a book club, attend a webinar, attend an event, etc. It is never too late to get started.

Connect with Ken on LinkedIn. Learn more about the Office of Diversity, Equity, and Inclusion at Muskegon Community College. 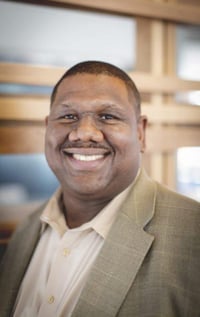